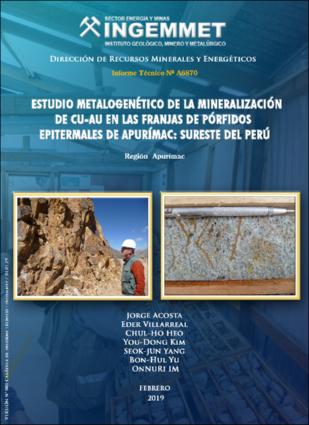 Descargar
Estudio metalogenético de la mineralización de Cu-Au en las franjas de pórfidos epitermales de Apurímac: Sureste del Perú. Región Apurímac
Acosta Ale, Jorge Gilberto | Villarreal Jaramillo, Eder | Heo, Chul-Ho | Kim, You-Dong | Yang, Seok-Jun | Yu, Bon-Hul | Im, Onnuri
Informe técnico; N° A6870
In April 2015, an international agreement was signed between the Geological, Mining and Metallurgical Institute (INGEMMET) and the Korean Institute of Geoscience and Mineral Resources (KIGAM) to study the metallogeny of copper and gold mineralization in the porphyry and epithermal belts of the Apurimac region. In recent years this region has been studied and explored due to the large number of metallic mineral deposits and mineral occurrences discovered by different mining companies (almost 70% of the surface is concessioned). Initially, Apurimac was considered a region with exclusive iron potential, but more recent studies have confirmed that there is also Cu-Au-Mo porphyry-skarn deposits. The deposits are in a metallogenic belts that is considered a probable extension of the Oligocene copper belt in Chile (Perello et al., 2003). The age of the Batolito Andahuaylas-Yauri emplacement is formed by an early stage of mafic rocks from 48 to 43 Ma and another of rocks of intermediate composition from 40 to 32 Ma, linked to an alteration-mineralization age of 28 to 33 Ma, 35-37 Ma and 40 Ma. In this way, in Trapiche the age of mineralization obtained by U-Pb in zircons is ~ 29 Ma, while in Constancia it is ~ 31 Ma, obtained by Re-Os in molybdenite. Thus, this metallogenic belt has produced more than 2 million tons of fine copper and houses reserves and resources of the order of 85 million tons of fine copper, 17 Moz gold and 407 million ounces of silver. The structural settings in the Apurimac region is complex, dominated by a compressive tectonic, influenced by the Abancay deflection. Five structural events related to a sinistral shear were determined. The processing of geochemical data from the Andahuaylas-Yauri Batolito ravine sediments showed background and threshold values for 14.59 and 36.89 ppb gold, for 0.25 and 0.6 ppm silver, for 25.7 and 98.25 ppm copper and, finally, for 1.95 and 7.55 ppm molybdenum, respectively. The most important geochemical anomalies are related to two possible targets. The first is located between Los Chancas, Antilla and Aucapampa and has Au-Cu-Mo geochemical anomalies. The second, south of La Yegua and east of Los Chancas, has Au-Ag-Cu-Mo geochemical anomalies. In the petrography, five coarse-grained intrusive facies formed by diorite, tonalite, granodiorite, monzonite and monzogranite, as well as porphyritic facies of monzonite, dacite and andesite were recognized. Within the opaque minerals, pyrite, chalcopyrite, magnetite and hematite were recognized. Magnetite was found preferentially in the mafic facies, while chalcopyrite and pyrite were found in the felsic facies. Magmatism in Andahuaylas-Yauri Batholith is characterized by chalco-alkaline and sub-alkaline with medium to high K content. The rocks belong to a meta-luminous and pera-luminous environment (ISA = 0.8-1.9), typical of granites Type I and Type S respectively. These characteristics are interpreted as a deep medium with magmatic differentiation from mafic to felsic rocks, possibly related to more oxidized than reduced magmatism. The ratios of K/Rb and Rb/Sr showed an evolution from unevolved to highly evolved magmas. The magmas went through processes of differentiation and fractionated crystallization in a tectonic environment, mainly of continental volcanic arc (CVA), related to highly evolved Type I granites. The rocks of the Andahuaylas Yauri Batholith present an enrichment in LREE and impoverishment in HREE. The intrusive rocks present differences in their magnetic susceptibility, thus the granite facies of the Andahuaylas-Yauri Batholith are classified in ferro-magnetic (average ~ 9x10-3 SI) and para-magnetic (average 0.2 to 4.6 x10-3 SI). In Las Bambas, the intruders have a ferromagnetic behavior (8.6 to 57x10-3 SI) as Constancia (14.5-18.5 x10-3 SI). However, the more felsic Constancia facies showed paramagnetic behaviors (0.5 to 1.4 x10-3 SI). In Trapiche the intrusive rocks only presented paramagnetic characteristics (0.03 to 1.7 x10-3 SI). The study of lead isotopes in the Andahuaylas-Yauri Batholith, determined that the source of Cu-Mo-Au mineralization comes from the upper crust (Trapiche and Constancia), while Cu-Au derives from a mixture of the upper crust and lower crust (Utupara and Cotabambas). Analysis of the initial Sr ratios determined that the mining potential in the Apurimac region is given by porphyries of small to large size (<100,000 tons of fine copper). There is an inverse relationship between the initial Sr ratios and the fine metal content of the mineral deposits.
Metalogenia | Cobre porfirítico | Mineralización | Recursos minerales
Instituto Geológico, Minero y Metalúrgico - INGEMMET
299 páginas.
https://hdl.handle.net/20.500.12544/2030
A - Informes técnicos INGEMMET
Files in This Item:
Show full item record


This item is licensed under a Creative Commons License