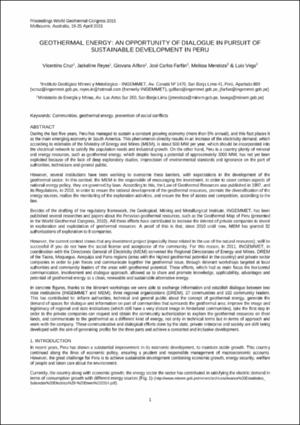 Descargar
Geothermal energy: an opportunity of dialogue in pursuit of sustainable development in Peru
Cruz Pauccara, Vicentina | Reyes, Jackeline | Alfaro Olivera, Giovana | Farfán Meza, José Carlos | Mendoza, Melissa | Vega, Luis
Proceedings World Geothermal Congress 2015
[ENG] During the last five years, Peru has managed to sustain a constant growing economy (more than 5% annual), and this fact places it as the main emerging economy in South America. This phenomenon directly results in an increase of the electricity demand, which according to estimates of the Ministry of Energy and Mines (MEM), is about 500 MW per year, which should be incorporated into the electrical network to satisfy the population needs and industrial growth. On the other hand, Peru is a country plenty of mineral and energy resources, such as geothermal energy, which despite having a potential of approximately 3000 MW, has not yet been exploited because of the lack of deep exploratory studies, imprecision of environmental standards and ignorance on the part of authorities, technicians and general public. However, several institutions have been working to overcome these barriers, with expectations in the development of the geothermal sector. In this context, the MEM is the responsible of encouraging the investment, in order to cover certain aspects of national energy policy, they are governed by laws. According to this, the Law of Geothermal Resources was published in 1997, and its Regulations, in 2010, in order to ensure the rational development of the geothermal resources, promote the diversification of the energy sources, realize the monitoring of the exploration activities, and ensure the free of access and competition, according to the law. Besides of the drafting of the regulatory framework, the Geological, Mining and Metallurgical Institute, INGEMMET, has been published several researches and papers about the Peruvian geothermal resources, such as the Geothermal Map of Peru (presented in the World Geothermal Congress, 2010). All these efforts have contributed to increase the interest of private companies to invest in exploration and exploitation of geothermal resources. A proof of this is that, since 2010 until now, MEM has granted 32 authorizations of exploration to 8 companies. However, the current context shows that any investment project (especially those related to the use of the natural resources); will be successful if you do not have the social license and acceptance of the community. For this reason, in 2011, INGEMMET, in coordination with the Directorate General of Electricity (MEM) convened the Regional Directorates of Energy and Mines, DREM of the Tacna, Moquegua, Arequipa and Puno regions (areas with the highest geothermal potential in the country) and private sector companies in order to join forces and communicate together the geothermal issue, through itinerant workshops targeted at local authorities and community leaders of the areas with geothermal potential. These efforts, which had as main focus the horizontal communication, involvement and dialogue approach, allowed us to share and promote knowledge, applicability, advantages and potential of geothermal energy as a clean, renewable and sustainable alternative energy. In concrete figures, thanks to the itinerant workshops we were able to exchange information and establish dialogue between two state institutions (INGEMMET and MEM), three regional organizations (DREM), 27 communities and 102 community leaders. This has contributed to: inform authorities, technical and general public about the concept of geothermal energy, generate the demand of spaces for dialogue and information on part of communities that surrounds the geothermal area; improve the image and legitimacy of regional and state institutions (which still have a very distant image in hinterland communities), take the first step in order to the private companies can request and obtain the community authorization to explore the geothermal resources on their lands, and communicate to the geothermal as a different kind of energy, not only in technical terms but in terms of approach and work with the company. These communicative and dialogical efforts done by the state, private enterprise and society are still being developed with the aim of generating profits for the three parts and achieve a concerted and inclusive development.
Energía geotérmica | Geotermia | Recursos geotérmicos | Desarrollo sostenible | Conflictos sociales | Prevención
International Geothermal Association
Cruz, V.; Reyes, J.; Alfaro, G.; Farfán, J.C.; Mendoza, M. & Vega, L. (2015). Geothermal energy: an opportunity of dialogue in pursuit of sustainable development in Peru. In: Proceedings World Geothermal Congress 2015, Melbourne, Australia, 19-25 April 2015. 9 p.
9 páginas. | Trabajo presentado en el World Geothermal Congress 2015, Melbourne, Australia, 19-25 abril, 2015.
https://hdl.handle.net/20.500.12544/2419
Ponencias, comunicaciones en congresos
Files in This Item:
Show full item record


This item is licensed under a Creative Commons License